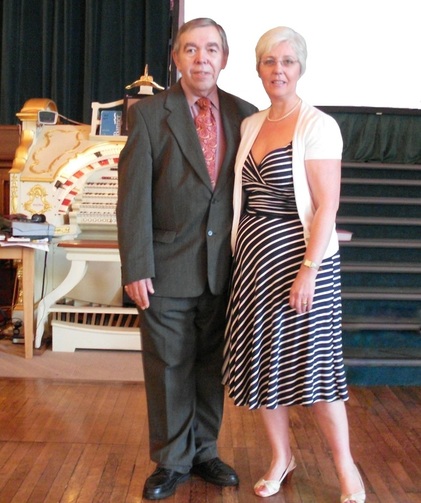 The late Michael Davies, Master of Ceremonies at Stockport
Town Hall with dance partner Evelyn Kennedy
For over 30 years, Michael Davies was the MC of the  Stockport Town
Hall Dances. Sadly, Michael died after a long illness in 2011. Michael
was widely acknowledged as an expert in ballroom  dancing, and had
many awards and trophies to his credit. Both Eric Barlow  and Charles Brown
held Michael in the highest regard, as did many in the organ and
dancing scenes, including the current organist of
Blackpool Tower Ballroom, Phil Kelsall ,
who worked with Michael on a number of occasions.

As a fitting tribute, a plaque was placed in
Stockport Town Hall's Ballroom in his memory, where it
can be seen to this day.

In 2008, Stockport Town Hall celebrated its 100th
Birthday, as part of the celebrations, a special Centenary Dance was
held in the Ballroom. Michael Davies
was filmed comparing this event.
This is one of the last events that Michael
took part in. Clips of this
event are available under the Movies section on the
menu above.